An Elizabethan collar is often used when a cat is itchy, but they can also be detrimental to an animal’s wellbeing; this short paper considers the pros and cons of the “plastic cone”. 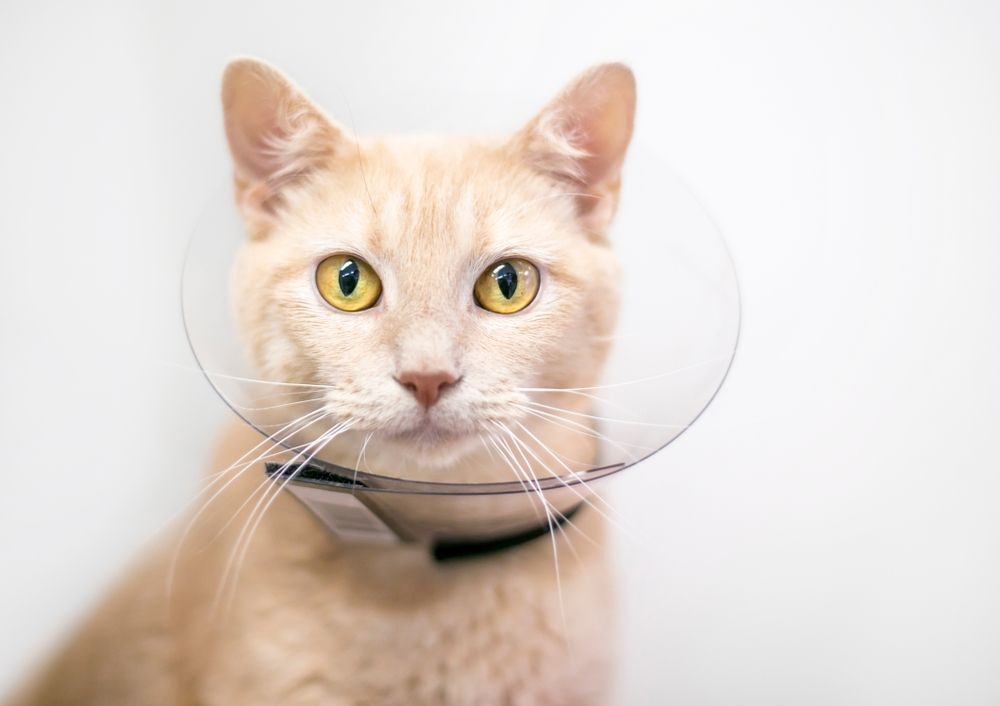 Elizabethan collars are an important non-pharmacological means of preventing self-trauma in feline patients, but they may negatively impact a cat’s behavior and welfare.

Suitable alternative or adjunctive interventions may be an option for some cats, but comprehensive communication with the owners can help mitigate a collar’s negative effects.

Elizabethan collars are a commonly used, non-pharmacological intervention employed to prevent self-trauma and overgrooming in feline patients. However, they may also cause distress to both cats and their owners 1; understanding the potential negative impacts of such collars may help veterinarians minimize this distress while maximizing the benefits of the collars when they are used.

What are the benefits?

Because cats are fastidious groomers, they are prone to removing sutures and traumatizing surgical sites, particularly on the body, limbs and tail. Moreover, the presence of pruritus because of a dermatological problem can lead to self-trauma and exacerbation of the condition (Figure 1). A well-fitted Elizabethan collar can often help, by allowing skin lesions to heal, wounds to repair and preventing the need for additional surgery; Box 1 offers a detailed list of indications for their use. In addition, the collars are inexpensive and may be applied by owners at home as well as members of the veterinary team at the clinic.

What are the downsides?

Many owners, and cat owners in particular, report that their pet dislikes wearing an Elizabethan collar. This was confirmed in a recent global survey involving the owners of dogs and cats that had worn an Elizabethan collar during the previous 12 months (n=434), with 77% of owners reporting that their companion animal had a worse quality of life when wearing the collar 2. To compound the problem, some pets may be required to wear a collar for extended periods of time. In a case series of 13 cats medically managed for deep ulcerative keratitis, the mean duration of Elizabethan collar use was 28 days, with a range of 13 to 73 days 3. Owners reported that some animals seemed to acclimatize to the collar over time, while others apparently did not.

It can be challenging to determine whether the behavioral changes seen in cats wearing Elizabethan collars are due to the collars themselves, or the underlying reasons for cats being required to wear them. For example, in one study looking at behavioral changes and severity of pain in cats recovering from elective neutering, wearing an Elizabethan collar significantly affected the overall extent of behavior changes in female cats 4. The most commonly reported alterations in this study included overall activity level, amount of time sleeping, playfulness and movement, but it can be argued that major surgery such as neutering could directly lead to these changes in behavior anyway.

Although many cats will wear Elizabethan collars without any apparent adverse effects, the welfare of some individuals can be negatively impacted by the collars. Another study noted that owners reported Elizabethan collars interfered with various daily feline activities including drinking (60.2%), playing (67.5%), and other actions such as toileting, grooming and being fitted for a harness or lead 2. Some owners also noted dramatic changes in their cat’s behavior, including agitation, altered posture or gait, or “freezing”. Other problems have also been reported; in some cases, the Elizabethan collar increased antagonism between cats in multi-cat households, and a collar may prohibit a cat from entering or leaving their house via the cat flap, interfering with their normal routine. Indeed, collars can interfere with an animal’s mobility in general, which may increase the risks to cats that have outdoor access while wearing one.

Elizabethan collars should therefore be the smallest size needed to shield the site requiring protection in order to minimize the impact on movement and daily activities.

Importantly, if the underlying cause of self-trauma is not addressed (for example, if a dermatological problem is not resolved) the cat may continue to suffer from the negative feelings of pruritus or pain, with self-trauma recurring once the collar is removed 5.

Many cats wear Elizabethan collars without any adverse effects, but the welfare of some individuals can be negatively impacted, interfering with daily activities such as drinking, playing, toileting and grooming

What can be done?

Although Elizabethan collars are often deemed to be necessary to protect cats from themselves, there is no guarantee that some cats (and their owners) will accept the collar within a reasonable time frame once applied. Because of this, veterinarians can and should consider alternative or adjunctive methods of preventing self-trauma (Box 2), which may eliminate the need for an Elizabethan collar entirely, or at least reduce the duration for which they are required to be worn.

If an Elizabethan collar is to be worn, discussion with the cat’s owners is essential, as they play an important role in minimizing the negative impacts and maximizing the benefits of the collar (Figure 2). It is therefore essential to communicate the following information.

• The reason their cat needs to wear the Elizabethan collar and the potential implications if this is removed prematurely (such as worsening of the skin problem, wound breakdown, or requirements for additional surgery and the associated risks and costs).

• The fact that some cats may have trouble performing certain activities, and may require some assistance (for example, elevating food and water bowls to make these accessible while the collar is on, removing the hood from a hooded litter tray, or providing alternative access if the collar makes use of a cat flap impossible).

• The potential risks of misadventure during unsupervised outdoor access for cats wearing a collar.

• How to remove, replace and adjust the collar (in case the owner removes the collar to help their cat eat or drink).

• The importance of contacting the veterinary hospital if they feel that their cat is not coping well with the collar.

Elizabethan collars are currently a necessary means of preventing self-trauma in some feline patients. The veterinary team can assist both cats and their owners by providing clear advice about the purpose of the collar, and the potential complications that can arise whilst in use, including transient impacts on feline behavior. Clinic staff can also help owners troubleshoot problems with collars and advise on strategies to maximize the comfort of cats whilst wearing them. Finally, veterinarians can consider alternative or adjunctive means of preventing self-trauma in cats, which may eliminate the need for an Elizabethan collar altogether, or at least reduce the duration of wear.

Cutaneous lymphoma in the cat is a rare but life-threatening neoplasm that warrants inclusion in the differential diagnosis list of many dermatology cases.

Skin lesions on a cat’s nose can be challenging in terms of differential diagnosis and treatment.

Cats will often present to first opinion clinics with a variety of foot lesions.

Dermatophytosis (often known as “ringworm”) is a common dermatological fungal infection in cats that should be diagnosed and treated as early as possible, as Amelia White explains.