Dog walking – One health, one welfare

Walking a dog may simply appear to be a normal part of dog ownership, but there can be more to it than meets the eye, as Carri Westgarth explains in this paper. 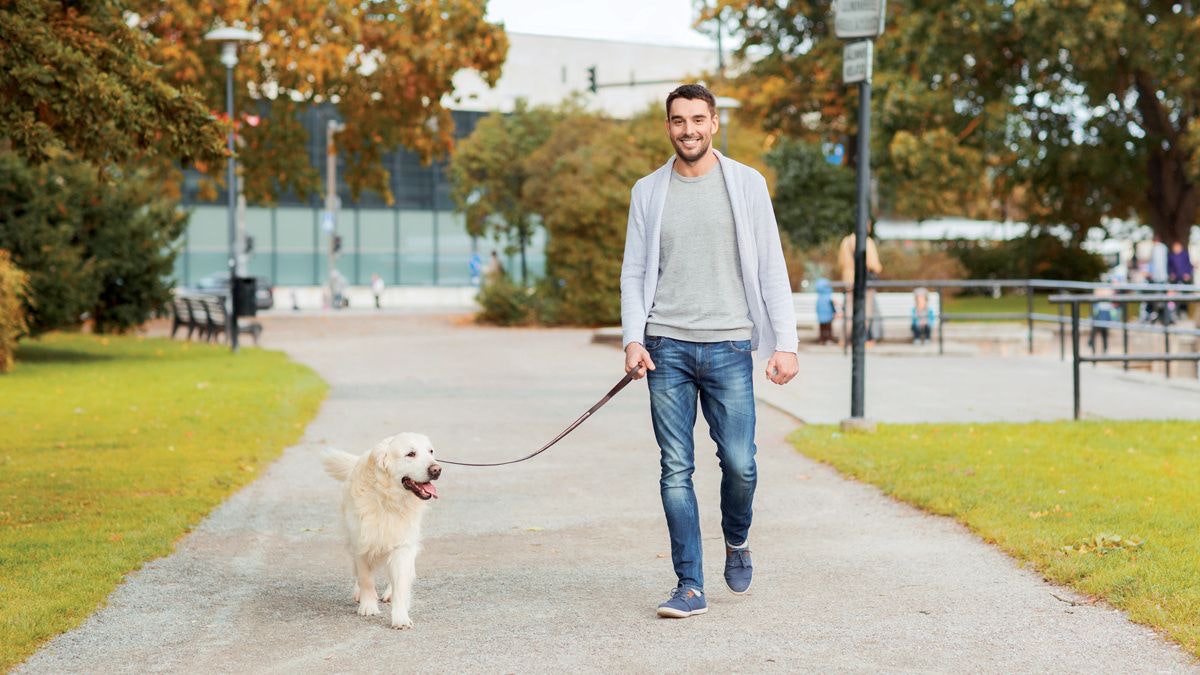 Dog walking is a key contributor to human physical activity levels and should be encouraged.

Owners are demotivated to walk their dogs if they do not find the experience enjoyable or do not have convenient access to good dog walking locations.

The perception that small dogs require less exercise is a barrier to dog walking, but size isn’t everything; breed perceptions matter too.

A recent trial showed that increased exercise alone did not lead to significant weight loss in overweight dogs, whilst dietary caloric restriction did.

Physical activity is known as the “best buy for public health” 1 due to its impact on multiple physical and psychological causes of morbidity and mortality, such as cardiovascular disease, type 2 diabetes, obesity, cancers and mental health 2 3. It is recommended that adults achieve a minimum of 150 minutes of moderate intensity physical activity per week – which can include brisk walking – but only 75% of adults on average meet the recommended guidelines, and this figure worsens in women, youth, older adults and higher income countries 4. Walking is recommended as the safest and most affordable physical activity, and considerable official effort is involved on interventions to encourage people to increase the time they spend walking in their daily lives 5.

Arguably the most powerful physical activity motivator we know is already found in many homes. Multiple studies across different countries have identified a cross-sectional association between dog ownership and increased physical activity levels of owners 6. A recent UK study noted 87% of dog owners were found to meet physical activity guidelines compared to 63% of non-owners 7. However, there is a question of whether dog ownership makes people more active, or more active people choose to get dogs; a handful of longitudinal studies tentatively support the former theory 6 8. This increased exercise appears to be due to taking more frequent and longer recreational walks if you own a dog, with no evidence that more intense forms of activity are substituted by time spent dog walking 7. However, the amount of dog walking that occurs also appears to be culture and country specific, with a lower occurrence in North America and Australia compared to the UK, which may be due to climate and weather differences 7. Thankfully, dog owners are less deterred from walking due to bad weather than people without a dog (Figure 1) 9, which partly explains why dog owners are so active compared to their non-owning peers, especially in the UK. There is also the question of how active dog walking is; sitting in a park whilst your dog runs around (Figure 2) is not really “walking”, but one study suggests 78% of dog walking can be classified as moderate and 4% as vigorous intensity, clearly sufficient for health benefits 10.

Physical activity is also important for dogs in terms of both physical health and mental stimulation. Approximately half of all pet dogs are overweight 11 12 and given that obesity develops as a result of a long-term imbalance between calorie intake and expenditure 13 owners may feel that simply increasing exercise is the solution for an obese dog. However, in a recent randomized controlled trial, increasing exercise alone did not lead to significant weight loss, whilst dietary caloric restriction did 14. Similarly in humans, small increases in walking are also not sufficient for weight loss 15. With this in mind, increased walking is likely to be beneficial for many dogs, but should not substitute for dietary advice when dealing with overweight pets.

Barriers and motivators for dog walking

Although at a population level dog owners are more physically active, there are still many people who do not walk their dogs as much as they perhaps should or could. One review suggested only 60% of owners walk with their dog on average 4 times (for a total of 160 minutes) per week 6, which supports the design of public health interventions to encourage people to walk with their dogs more often 8. A number of factors associated with increased or decreased dog walking behavior have been identified as potential targets, but the strongest evidence is linked to the nature of the human-dog relationship; some dog-owner relationships are better at providing social support, motivation, and obligation for dog walking than others 16. Recent in-depth interviews and observations with owners about why they walk their dogs and how they decide how often to walk them has identified that when an owner feels they have a close two-way relationship with their dog, it engenders a sense of responsibility to meet the perceived needs of the dog to get exercise 17. Although owners describe walking as done principally “for the dog” it is clear that owners also use it as a mechanism for their own stress relief and relaxation 18. As one owner said;

"It's not just about the physical activity they give you, it's the mental benefits. My friend who doesn’t have her own dog comes walking with us and says that it's impossible to leave depressed after watching the dogs running around enjoying themselves."

This is supported by quantitative research indicating that intrinsic motivators (e.g., enjoying the activity) seem to be more important with regard to dog walking than extrinsic motivators (e.g., to avoid other consequences such as guilt) 19. Key to this enjoyment is the vicarious pleasure experienced when observing a dog having a good time, typically off-leash (Figure 3). Therefore, the ability to access areas where dogs can be allowed off-leash is paramount in order to support owner enjoyment, and thus motivation, for dog walking.

The size of the dog has consistently been found to be a factor associated with dog walking behavior 20, or motivation provided by a dog for walking 21, with small dogs less likely to be walked than larger ones. However, size is a rather crude measure, and exercise amounts vary widely by breed 22, with some of the least-exercised dogs actually falling into the large-breed category (Box 1). The perception that small dogs, or certain breeds, require less exercise is a common barrier to motivation for dog walking, and requires addressing 18.

The behavior of the dog can also demotivate walking, due to two main reasons;

Under these conditions it is easy for the owner to justify it is “best for the dog” not to walk it because it is “nervous” or “lazy” 18. In particular, having multiple dogs to walk may cause problems 20, and the perception that a dog is old or sick, or too overweight, also demotivates 21. The behavior of other people can also discourage participation in dog walking if it is easy to let someone else walk the dog instead of you 21. The establishment of dog walking as a habit or routine has recently been suggested to be important in both qualitative 18 and quantitative research 23. Last but not least, local access to suitable places to walk is also associated with dog walking 24 25, and emphasizes the importance of policy and neighborhood design in providing suitable structures whereby people are encouraged to be physically active (Figure 4).

As a veterinary professional whose expertise is valued by owners, there are a number of ways you can help to promote and motivate dog walking, which will not only benefit your patients but also their owners:

As a veterinary professional whose expertise is valued by owners, there are a number of ways you can help promote and motivate dog walking, which will not only benefit your patients but also their owners.

Box 2. Advice for owners on training for loose-leash walking.

There are many harnesses and headcollars on the market that can help with pulling, but they are not – as most owners think – a magic wand. They still require dog training, but they make the process easier. The best aids are headcollars or harnesses that attach at the muzzle and allow a “power steering” effect to direct the dog during training (Figure 5). Collars that tighten around the neck can actually teach a dog to pull (in an attempt to get away from the pain) and should be avoided. Harnesses where the leash attaches at the back of the dog should also be avoided, as this just gives them even more strength to pull through their shoulders.

The most powerful motivator for increased physical activity is already found in many homes; multiple studies have shown a positive association between dog ownership and increased activity levels of owners.

What if an owner cannot walk with their dog? Sometimes, taking long walks can be difficult, for example, owner health limitations. Firstly, owners can be advised to ask their physician what amount of exercise is suitable for their needs, and some level of walking is likely achievable. Secondly, rather than just advising they get a dog walker if they cannot provide sufficient exercise by themselves, there are other ways that an owner can be active with their dog, including agility or obedience training, teaching tricks and playing games. Some movement together is far better than none.

Dog walking is important for the health and wellbeing of both dogs and their owners, and should be facilitated. Strategies identified for increasing dog walking include tackling behavioral and training issues in order to make walks more enjoyable for owners, challenging perceptions of exercise needs of small dogs, teaching owners how to form regular dog-walking habits, and advocating for the provision of environments suitable for off-leash dog walking. Without our pet dogs, population physical activity levels, and in turn physical and mental health, would be far worse.

Dr. Westgarth is a senior lecturer in Human-Animal Interaction at the University of Liverpool with a passion for understanding the relationships we have with Read more

Owners increasingly regard their pet as a family member and expect the best quality of care when they choose a veterinary clinic...

Natalie Marks has recently been involved with a project designed to help practices...

Nancy De Briyne describes how the veterinary profession can develop...

Science has started to unravel the processes behind aging...