How important are dietary long-chain polyunsaturated fatty acids for healthy development? Russ Kelley describes some recent work that suggests they are a vital part of a puppy’s nutritional requirements. 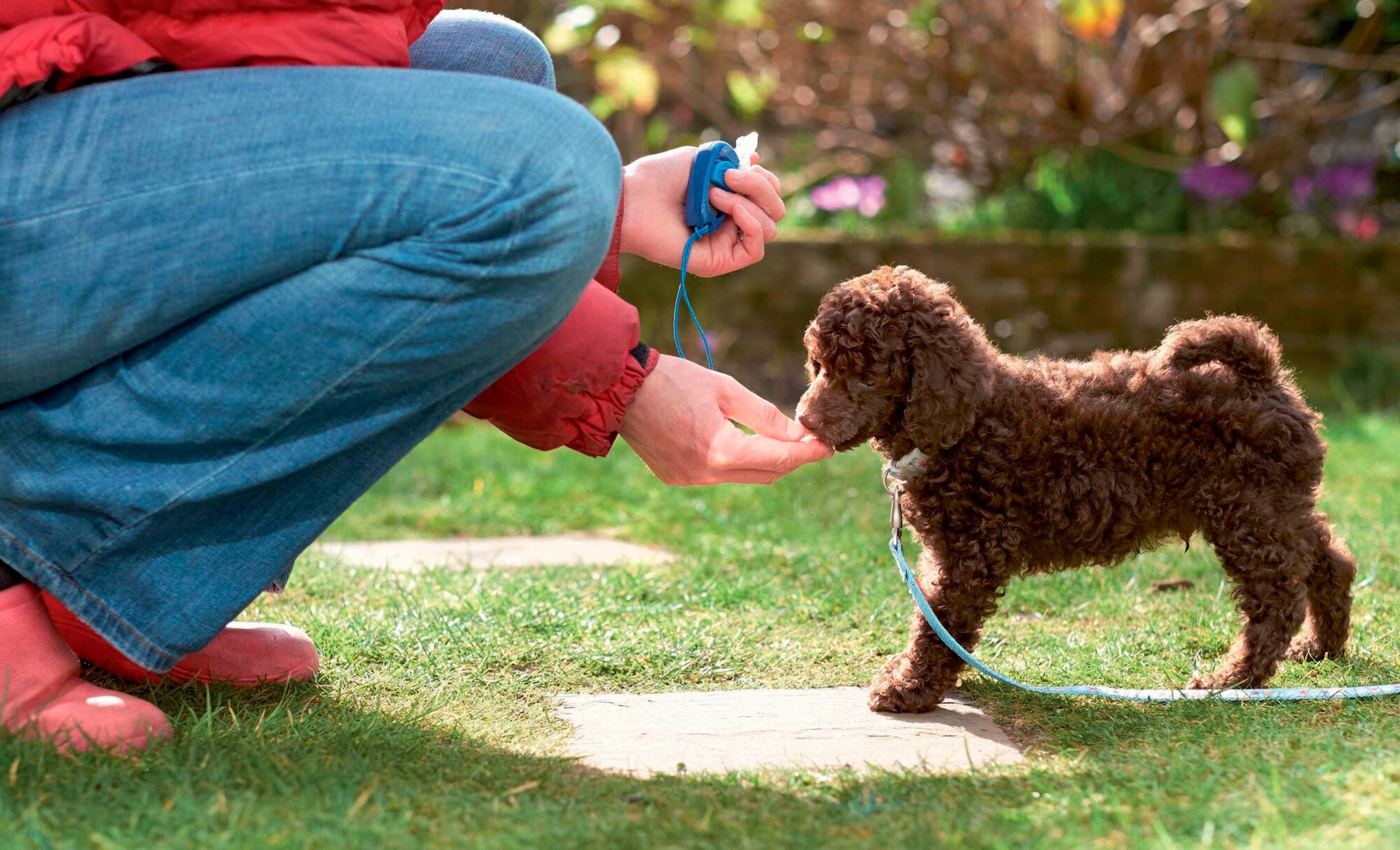 Dietary docosahexaenoic acid (DHA) enrichment prior to birth or during the neonatal period may help promote learning and memory in puppies.

Puppies born to dams fed a high DHA diet and weaned onto an equivalent diet are more likely to succeed in tests of cognitive function than puppies reared on low DHA diets.

Long-chain polyunsaturated fatty acids (LCPUFAs) play vital roles in canine development and physiology. In particular, high concentrations of the omega-3 fatty acid docosahexaenoic acid (DHA) are to be found in retinal and brain tissue, and are known to rapidly accumulate in these tissues during the last third of gestation and the first few months of neonatal life, the period that corresponds with maximal brain growth in mammals. This early deposition of DHA appears to be necessary for normal neural and visual development 1, as sub-optimal DHA status in young animals has been associated with impairments in cognitive and visual function, including reduced learning ability, impaired memory, abnormal electroretinograms, and impaired vision 2. It has been proposed that dietary DHA enrichment prior to birth or during the neonatal period may also be helpful in promoting certain types of learning and memory 3.

Sub-optimal levels of docosahexaenoic acid in young animals have been associated with impaired cognitive and visual function, including reduced learning ability, diminished memory, and compromised vision.

LCPUFAs are supplied to the developing fetus through the placenta and to the neonate via the dam’s milk. Alpha-linolenic acid (ALA) is the precursor of DHA, but conversion of ALA to DHA is inefficient, and maternal DHA biosynthesis may not be sufficient for optimal enrichment of maternal stores and transport to the developing fetus. Studies suggest that the dog’s capability to produce DHA from ALA occurs primarily during the first few weeks of life, and it is not known whether the amounts produced are sufficient to support optimal neurological development 4. Supplying DHA in the mother’s diet may be the most efficient way to provide the nutrient to developing and newborn puppies, and including DHA (rather than ALA) in the post-weaning diet may be the most efficient way to ensure that the body receives the required amounts necessary for continued neurological development.

As yet, the underlying mechanisms of DHA-enhanced cognitive benefit are not fully understood. However, DHA is known to play a role in several stages of neuronal development in both fetus and neonate, and there is evidence that it affects the fluidity of the synaptic membrane, modifies enzyme function, and increases the production or expression of dopaminergic receptors and compounds. Such influences may lead to improved learning and memory, as the dopaminergic systems are specifically involved in regulation of behavioral process such as motor activity, emotionality, and spatial orientation 5.

Lewisburg PHNC has completed some controlled studies to evaluate the effects of maternal (fetal-neonatal) and post-weaning dietary DHA enrichment on learning and memory in puppies. Three studies were conducted:

All the study diets were formulated to provide complete, balanced nutrition for all life stages per AAFCO* Nutrient profiles, and differed only in the composition of the oil mixture used, as shown in Table 1.

8 puppies that had been born to dams fed a DHA-enriched diet, along with 8 pups born to dams fed a non-enriched control food (Table 1) were tested to evaluate spatial (direction) learning and visual discrimination. Three rectangular doors positioned along a white wall were marked with a black symbol (circle, square or triangle). Puppies were randomly assigned both a door and a visual symbol and trained to approach the door/symbol for a food reward. Once trained, spatial memory (by assessing how a puppy located its assigned door) and visual discrimination (by how it identified its assigned symbol) was evaluated.

After training, all 16 puppies were able to correctly select their assigned door and symbol. During the spatial testing period, all puppies in both groups showed at least a 90 % success rate in approaching their assigned door within 120 seconds. However, when tested for visual discrimination, puppies born to dams fed the high DHA diet performed better than puppies born to dams fed the low DHA diet, and puppies in the former group performed better overall than those in the latter group.

28 female Beagles were randomly assigned to one of three diets (with low, medium or high DHA content; (Table 1) and fed ad libitum throughout gestation and lactation, with their puppies weaned onto the dam’s diet for the study period (Figure 1). A total of 60 puppies from the litters were selected to assess cognitive function (visual discrimination and spatial learning) in a T-maze between 9 and 15 weeks of age (Figure 2). Puppies were trained to associate a symbol (a square or circle) with a food reward located in one arm of the maze, and an olfactory clue (but no food) in the other arm. A “reversal task phase” was then started, in which the location associated with the puppy’s symbol was switched (e.g., if a circle originally designated the food treat to be in the right arm of the maze, it now indicated the food was in the left arm).

This study involved puppies born to dams fed an unsupplemented diet throughout gestation and lactation. Puppies were randomly assigned to either a low or high DHA diet at weaning (Table 1), and cognitive function testing was performed using a radial 8-arm maze with numbered doors at the end of each arm which could be opened or closed independently (Figure 3). This study was designed to test spatial orientation and short, medium and long-term list memory – also referred to as recency effects (short-term memory) and primacy effects (long-term memory). Maze testing began at 15 weeks of age; again, the puppy had to enter a maze arm to retrieve a food reward, but there were four phases of increasing difficulty to this study. Data were initially analyzed to account for the main effects of replication, gender, diet treatment and the associated interactions, but the first two factors were found to have no significant effects and were subsequently removed from the model, with the final analysis including only diet treatment.

All puppies successfully completed the first two phases, although it was noted that, puppies fed the high DHA diet needed fewer training sessions than puppies in the other group for phase 2 (although the differences were not statistically significant between the two groups).

Puppies are typically adopted into their permanent homes shortly following weaning, and most owners have little or no opportunity to impact the dam’s DHA status or her puppies prior to adoption. Similarly, when puppies are born to abandoned or malnourished mothers (e.g., in shelter and rescue situations) the dam’s nutritional status is often either unknown or deficient. Therefore, an important but unanswered question is whether feeding a DHA-enriched diet after the maternal influence period can still benefit cognitive function and learning. These three studies offer evidence that puppies with enhanced DHA status do have superior performance in cognitive testing. Although desirable, maternal enrichment during gestation and lactation may not be crucial for improving DHA status in newborn puppies. However, providing growing puppies with a DHA-enhanced diet following weaning can still provide cognitive benefit, even in the absence of maternal enrichment – as shown in Study 3; the pups demonstrated improvements in learning and memory at around 15-25 weeks of age, the time when most new owners will have begun to socialize and train their new dogs (Figure 4).

All procedures described within this manuscript were reviewed and approved by the Institutional Animal Care and Use Committee of The Iams Company (Lewisburg, OH, USA)

Cumulatively, these studies support earlier findings in the dog (and other species) in terms of the relationship between DHA and cognitive ability; essentially, while maternal enrichment with DHA is desirable for the developing canine fetus and young puppies, benefit can still be acquired by adding DHA to the diet offered to weaned puppies between 6 to 25 weeks of age, and that post-weaning supplementation in the absence of maternal enrichment continues to enhance cognitive performance in the growing puppy, specifically those parameters related to memory and focus. Further studies are however needed to explore the effects of DHA enrichment on cognitive function during later periods of development and in adult and senior dogs.

After graduating from Auburn University in 1997, Russ Kelley joined the Iams Company, where he led research into maternal and neonatal nutrition Read more

Many owners will choose their puppy for all the wrong reasons, but Jon Bowen identifies some key factors that can help a young puppy develop into a great member of the family.

Understanding the different stages in a kitten’s development is key to advising owners as to the best ways to interact with their cat, as Kersti Seksel describes.

Maternal behavior plays a major role in the survival of puppies during the first weeks of life, and it may also have a long-lasting effect on their cognitive development. This paper offers some cues and clues that could help the clinician when dealing with newborn puppies.

Successful kitten visits to the clinic will set the feline patient up for a lifetime of veterinary care, as Liz O’Brien explains.